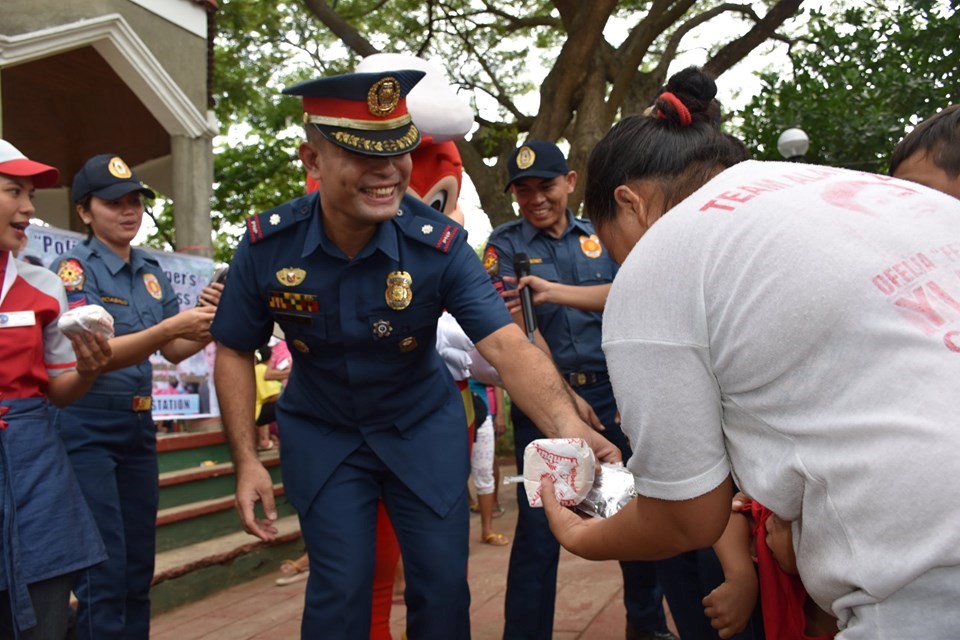 “He who wins the crowd, wins the war”

Adherence to human rights is one of the main components of the Government’s War against illegal drugs.  Despite the allegations of the few, which until now remain unsubstantiated, the Philippine National Police has carefully implemented a well-studied human rights-based approach towards defeating the illegal drug menace which, over the years, destroyed the lives of millions of Filipinos.

It is part of the repertoire of the Philippine National Police in winning this war to talk to communities, visit schools, provide for medical and dental supplies, feed and converse with children, fora for students at schools and to establish community linkages.  These community-based strategies will keep the good men on their toes and protect the vulnerable sectors from either being victimized by crimes perpetrated by drug addicts or being influenced to involve themselves in illegal drug use and trade.  In the long run, the ultimate objective is to agitate these sectors to join the government in its war against illegal drugs, organize them behind and around law enforcement agencies as well as mobilize them towards participating directly or indirectly in the war on drugs.

The assignment of the current Chief of Police, PLTCOL Gerard Ace Pelare (PNPA Class 2007), also a lawyer by profession, to the City of Talisay, Cebu came at a time when the City is severely challenged by illegal drugs.  In fact, President Rodrigo Roa Duterte has singled out the City of Talisay as a drug haven three times since 2018.  The perception of the notoriety of the City of Talisay remains the same despite the relentless conduct of high-impact operations in the area.  To better understand the dynamics in the City of Talisay, here is a brief backgrounder.

The City of Talisay is adjacent to Cebu City going to southern Cebu.  It has a very progressive economy and developing infrastructure.  It is also home to more than 250,000 people making it the most populated among the six component cities in the Province of Cebu.  However, in early 2000, the City of Talisay started to gain prominence of notoriety because of Barangay Tangke, a barangay along the shoreline mostly occupied by informal settlers where illegal drugs and notorious criminals thrive because of its terrain and accessibility to Cebu City.

Talisay City Police Station is a leading unit known to be one of the most successful police units in terms of operational gains in the war on drugs in 2020 through its OPLAN Limpyo Talisay Project.  The project is meticulously designed to conduct series and simultaneous targeting multiple subjects within a single drug syndicate.  For instance, on January 11, 2020, from 4:00 AM to 8:00 AM, 13 drug busts were conducted which resulted in the arrest of 46 drug suspects and the confiscation of P 5 million worth of suspected shabu.  However, the relentless conduct of police operations is coupled by the unit with numerous police-community relations activities that are aimed at educating and empowering the good citizens regarding the illegal drug menace.

One important aspect of the war on drugs is to gauge the efficiency of the strategy and the approval of the community. Thus, measuring and sustaining the OPLAN Limpyo Talisay, various community projects were simultaneously initiated by the local PNP, LGU of Talisay City, and other stakeholders such as POLICE PACT (Police and Partners Act of Kindness for the Children in Talisay); The OPLAN SIDLAK (Studyanteng Isog Batok Drugas, Lamdag and Kaugmaon) and PULIS MINI ME PROJECT (students feels first hand in managing the police station); OPLAN KALINAW TALISAY (brining social services to each barangay right at the doorsteps of the community). On this occasion, a feedback mechanism is readily available in all engagements.

The PNP’s fight against illegal drugs is done in full accord with the fundamental requirements of due process and human rights. The local police approach was fully implemented in partnership with the LGU, and the whole community.  The PNP believes that in this war on drugs, the law is our guide, human rights are the main policy and fully implemented in a whole-of-community approach.